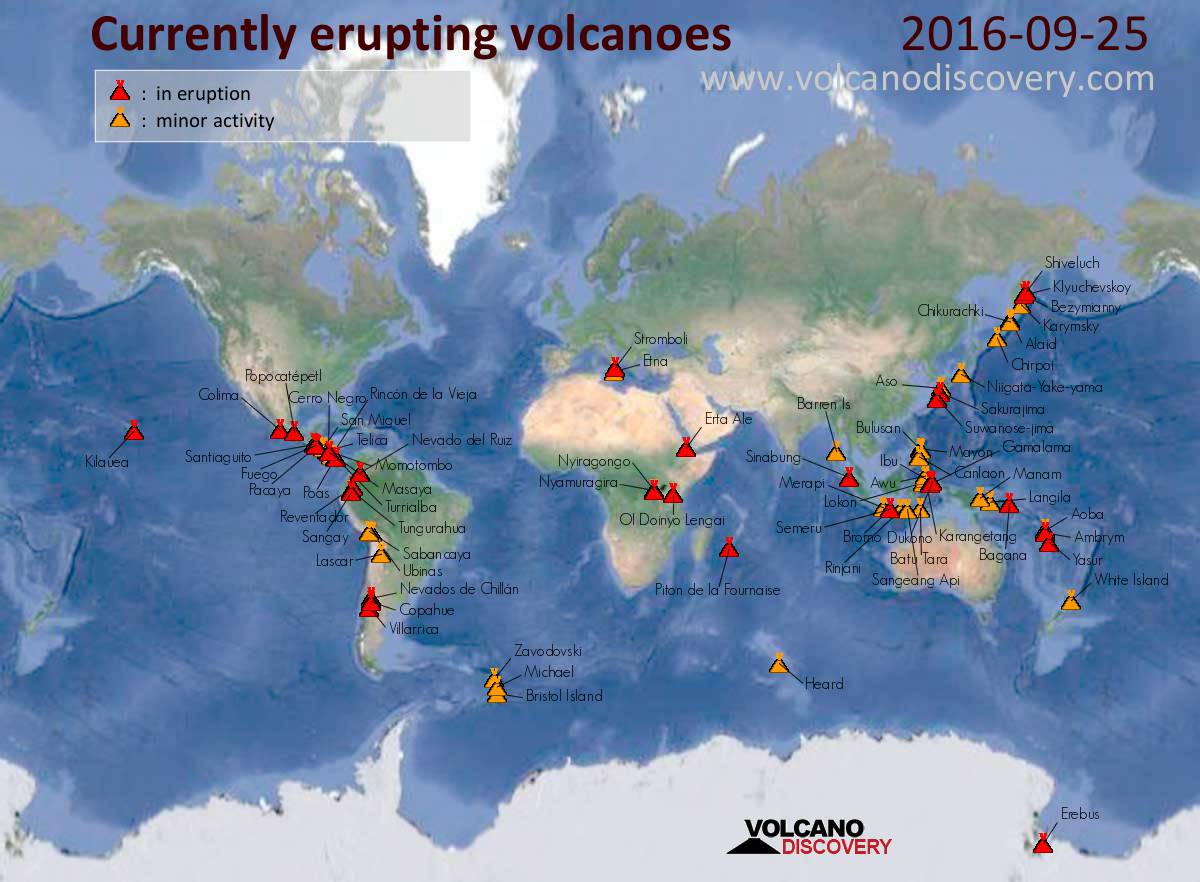 Kilauea (Hawai’i): (21 Sep) Following the inflation cycle that began 2 days ago (and might be now turning into deflation), the lava lake in the Halema’uma’u summit crater has risen again into clear view from the HVO observatory. This morning, its surface was only 12 m (39 ft) below the rim.
An explosion of the lava lake was observed yesterday around 21:15 local time – probably triggered by a larger rockfall from the unstable crater walls, a fountain of incandescent material rose from the NE end of the lake to about the outer rim near the old overlook area, generating a plume of steam and ash that rose several hundred meters and quickly dissipated SW.
The two sea entries at Kamokuna remain active and well alimented; additionally, active pahoehoe breakouts are present about 2 km (1.2 mi) inland from the coast and higher up on the pali.

Turrialba (Costa Rica): After a day of relative calm, a new pulse of ash emissions occurred from the volcano this morning.
The current phase of activity at the volcano began around 13 Sep with renewed, but sporadic and weak ash emissions, but intensified drastically on 19 Sep reaching a new peak of activity (so far). Between 02:53 and 15:30 local time, the volcano produced several phases of near-continuous explosive activity with strong ash emissions, generating several ash plumes that rose more than 1000 m, drifted west into the Central Valley, causing moderate to heavy ash falls and forcing a temporary closure of the capital’s Juan Santamaria International Airport.

Some of the explosions were strong enough that part of the dense eruption columns collapsed into small pyroclastic flows that spread onto the crater floor. There are no reports of damage or injuries.
4 eruptive pulses on 19 Sep 2016:

Mauna Loa (Big Island, Hawai’i): A magnitude 4.0 earthquake occurred at 2.4 km depth beneath the summit caldera of the volcano half an hour ago (04:25 am in Hawaii).
Such relatively large quakes under active volcanoes can (but not necessarily must) be precursors of new eruptions if they are being caused by magma pressurizing rock and fracturing it on its way up. Whether this particular quake is in fact caused by magma movements is impossible to know a priori without further analysis.
Mauna Loa is statistically “due” for an eruption (its last having been in 1984) and increased seismic activity and inflation over the past years have indicated an ongoing period of unrest due to gradual magma recharge. 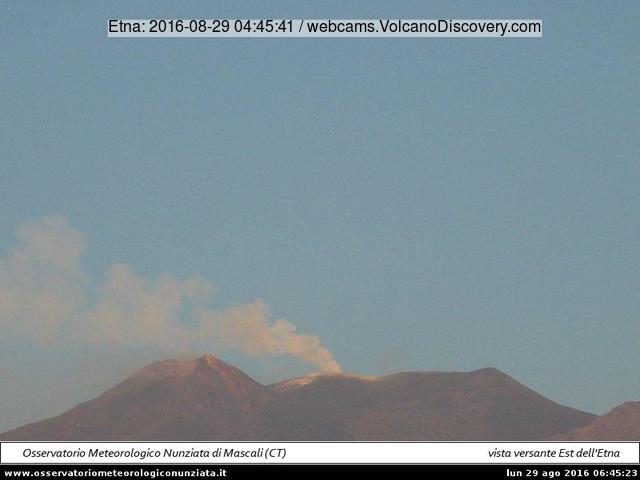 Etna (Sicily, Italy): Over the past weeks, the volcano’s activity (at Voragine and the New SE crater) has generally decreased and tremor levels are currently low.
While not entirely stopped, the emissions of hot incandescent gasses and ash, along with weak strombolian activity from the new vent in the Voragine crater have become less pronounced. Similarly, the sporadic ash emissions from the New SE, observed intermittently until at least Saturday, have ceased or become even rarer.
This could rapidly change, however.

Katla (Southern Iceland): At least one earthquake of magnitude 4.5 occurred this morning under the volcano, the strongest recorded for Katla in recent decades. It was felt in nearby areas.
The Icelandic Met Office (IMO) reported two quakes, one at 01:47:02 local time at 3.8 km depth 8.1 km east of the summit (Goðabunga) followed 20 seconds later by another magnitude 4.5 quake at 0.1 km depth. Caution is required as these data are from automatic calculations which could actually in fact describe only one quake.
… [read more] … [show less]
During the past 48 hours, IMO has detected 48 earthquakes – most of them tiny, but including 4 of magnitudes of 3 or higher – at shallow depths under Katla.

Klyuchevskoy (Kamchatka): The activity of the volcano, mainly effusive, remains intense. There are currently 3 active lava flows descending the steep stratovolcano: two parallel ones on the eastern-southeastern flank and a new one on the upper southwestern slope which has appeared about a week ago.
An intense thermal anomaly corresponding to the large output of lava is visible on satellite data.
Small ash plumes from strombolian activity in the summit crater have been producing plumes today that reached 20,000 ft (6 km) altitude and drifted eastwards today.

Bagana (Bougainville Island, Papua New Guinea): Low-level ash emissions occur at the volcano, producing a plume at estimated 7,000 ft (2.1 km) altitude drifting west from the volcano.
The latest Terra satellite image shows a narrow plume of mostly gas and possible light ash content extending about 70 km to the west of Bougainville Island.
A moderate thermal hot spot is visible on MODIS data and has increased recently. This suggests that the volcano’s activity (effusive or mildly explosive or both) has picked up recently. 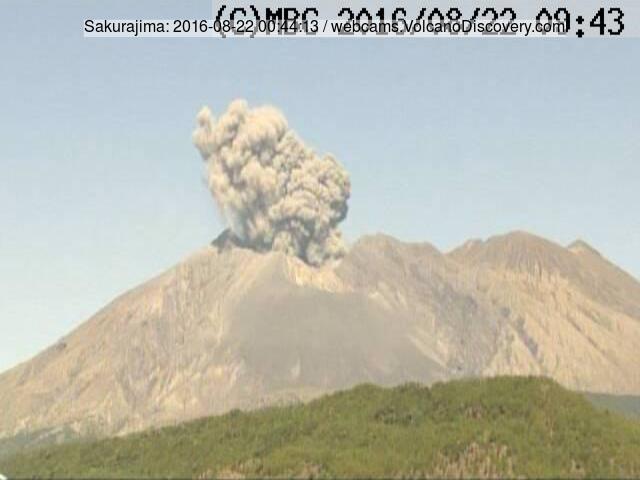 Sakurajima (Kyushu, Japan): The volcano has been getting more active again during the past night: a series of small explosions and associated ash emissions occurred from the older summit crater, Minamidake:

It will be interesting to see whether or not Sakurajima returns to its previously so typical style of intermittent, often quite powerful vulcanian-type explosions (at rates ranging from one every few days to several per day). 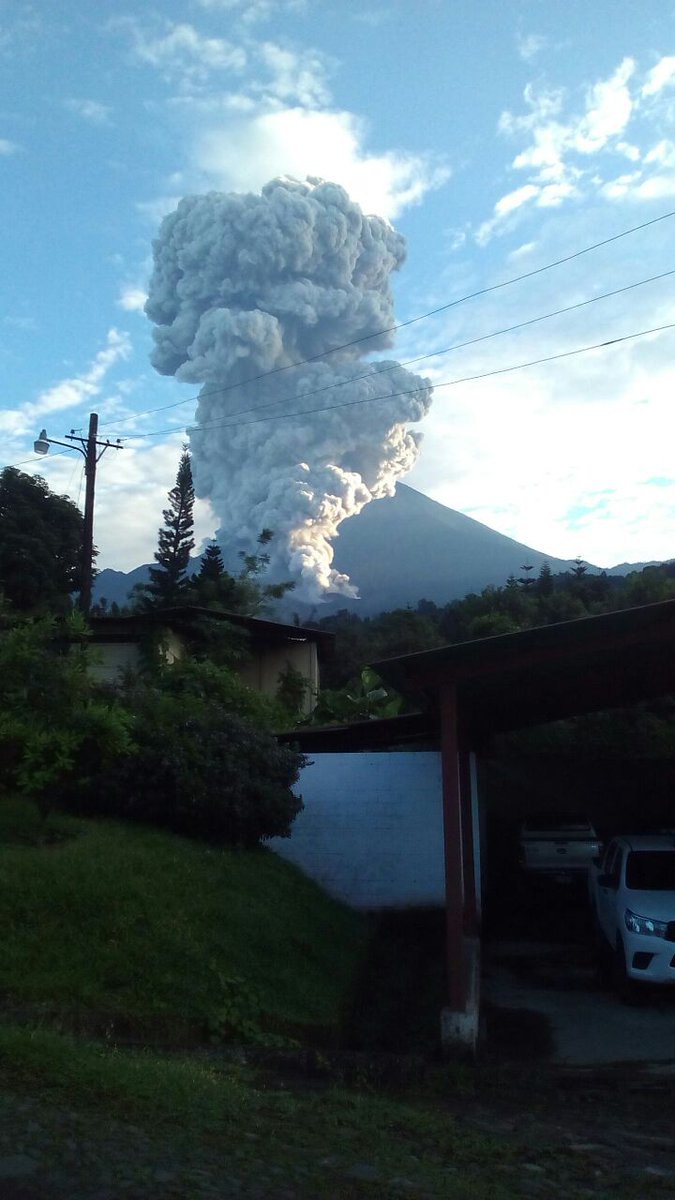 Shiveluch (Kamchatka): The activity of the volcano remains essentially unchanged at currently low to moderate levels. The slow growth of the lava dome continues as viscous (sticky) lava accumulates in the dome. A (small) part of the inherently unstable dome collapsed yesterday morning and generated a pyroclastic flow that traveled down the SW valley between the dome and the remnants of the 1964 collapse scar, which forms a horse-show shaped wall around the dome.
The flow reached approx. 1500 m length and was 300-400 m wide. A second flow of similar size occurred immediately after. The resulting ash plume rose approx. 1 km.

Suwanose-jima (Ryukyu Islands): The volcano’s activity has picked up again. Since yesterday, webcam images show constant red glow and intense degassing as well as intermittent ash emissions some of which have also been reported by Tokyo VAAC.
Most likely, a new phase of intense strombolian activity is currently taking place at the active O-Take crater on the remote island.

Dukono (Halmahera): Continuous ash emissions have been observed during the past days. Satellite images show a plume extending into various directions (to the east today).
In short, the intense activity of the volcano (one of the most active of Indonesia) observed also during recent visits by various people seems to continue.

Yasur (Tanna Island, Vanuatu): Wellington VAAC reports ash plumes, mostly confined to Tanna Island, visible on satellite imagery today. This suggests that activity at the volcano is elevated at the moment. It is urrently at GeoHazard’s level 2, on a scale of 0-5 (5 being highest), meaning that “volcanic explosions remain intense, volcanic bombs may fall in and/or around the crater and volcanic gas and ashes can also affect some villages.”
Yasur is one of the few in the world with persistent strombolian activity, is elevated at the moment. We will visit the volcano again in September and report from on location.

Aoba (Vanuatu): Wellington VAAC received a pilot report of plumes of white steam and ash rising 1000 ft (300 m) above the active crater lake Voui this morning. This could suggest that perhaps some phreatic explosions have taken place, but it is far from certain whether the volcano (with almost no monitoring on ground) is about to erupt or not.
The remote location of the volcano’s large caldera and its extremely difficult make direct observations very rare.

According to GeoHazard, “Aoba probably should be considered at present times as the most dangerous volcano of the archipelago, due to the presence of a large lake in the main crater.”
Strong explosive eruptions have been frequent in the past, generating dangerous mud flows that left thick lahardeposits in the central part of Ambae island and up to the coastlines.

Santiaguito (Guatemala): The series of strong vulcanian explosions continues although they hve become rarer. This morning, another one occurred that produced a mushroom-shaped eruption column that rose to approx. 18,000 ft (6 km) altitude.
Partially collapsing parts of the eruption column generated moderately large pyroclastic flows on the eastern side and perhaps on the SW slope of the lava dome as well. As usual, ash falls have occurred in nearby towns and villages such as San Felipe and Mazatenango Retalulehu.