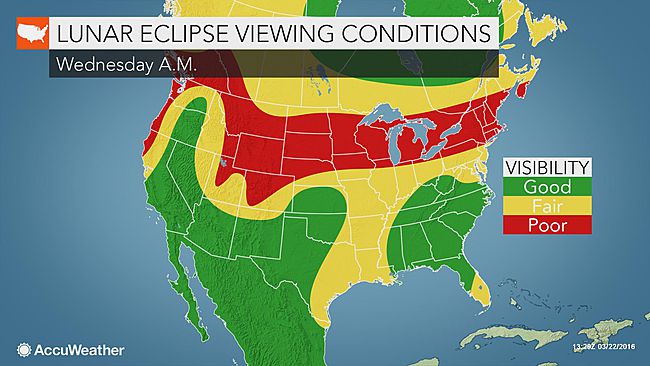 A minor lunar eclipse will provide a treat for skywatchers this week.

Though subtle, this lunar eclipse will be visible on Wednesday morning, reaching peak around 7:47 a.m. EDT (4:47 a.m. PDT).

This event is known as a penumbral lunar eclipse, meaning the moon will move on the outer edge of the Earth’s shadow. Though a dark, crescentlike shape will not appear, a dark, shaded section will be visible for those with clear conditions.

Someday, This Humble Fungus Could Kill Millions of People

In the 1960’s, a biologist by the name of Norman Borlaug created several strains of high yield, disease resistant wheat. He developed these strains in countries like India, Mexico, and Pakistan, and with the help of modern agricultural techniques, he helped these countries double their wheat yields in less than a decade. Borlaug’s crops were so successful at bringing food security to the third world, that it’s estimated his efforts have since saved over a billion lives.

That should give you a pretty good idea about how important wheat is to the global food supply. There are literally billions of people who are living right now, because modern civilization is so good at growing this stuff. Imagine what would happen if something threatened even a small percentage of the world’s wheat yields.

Unfortunately, that something exists and it goes by the name of Ug99, a strain of stem rust fungus that is known to kill wheat plants.

Since 1998, Ug99 has been sweeping its way across Africa to the Middle East from its origin in Uganda. Altogether, 11 confirmed races in the Ug99 lineage have been detected in Egypt, Ethiopia, Eritrea, Iran, Kenya, Mozambique, Rwanda, South Africa, Sudan, Tanzania, Uganda, Yemen and Zimbabwe, showing that the pathogen has evolved and expanded widely, according to recent research by Singh, Hodson and collaborators.

So just how bad is Ug99? When a single spore lands on a wheat farm, it’s been known to eventually multiply and kill 100% of the crop, before making the leap to neighboring farms. Though there are some breeds of wheat that are resistant to it, less than 10% of the farms in the countries where it has shown up, actually grow them. And many of these wheat strains are of the same variety that Norman Borlaug developed decades ago. Thus, the spread of this stem rust threatens to derail decades of agricultural progress in the third world.

But truth be told, it may not stay in the third world for very long. Much like a virus, stem rust can ‘infect’ people. The spores can cling to clothing and travel anywhere in the world. Each acre of stem rust infected wheat can create billions of spores, so it wouldn’t be far-fetched for someone to brush shoulders with one of these crops, and spread it to anywhere in the world.

In any case, it could still make the leap to the developed world even without human help. It’s widely believed that stem rust spores could conceivably be blown across the ocean and into Australia, one of the world’s largest wheat producers. And if it can make it there by natural forces, it can make it anywhere.

While the scientific community is busy trying to figure out a way to deal with this threat, the Ug99 fungus has always been one step ahead of them. It’s a rapidly evolving organism that has adapted to nearly every strain of wheat that it has come across. Fortunately, dozens of wheat genes that are resistant to it have been discovered, so there is some hope that it can be beaten in much the same way that it was beaten in the past: by breeding resistant strains of wheat with the ones that aren’t resistant.

However, a successful breeding program would take years to develop. In fact, you would probably need separate programs for different regions and climates. And once several highly resistant plants were created, it would take several more years before the world’s farmers could make the switch to the new wheat strains. Until that happens, Ug99 will loom over the global food supply, threatening to eliminate sustenance for millions, or perhaps even billions of people.

This information has been made available by Ready Nutrition: Someday, This Humble Fungus Could Kill Millions of People

Joshua Krause was born and raised in the Bay Area. He is a writer and researcher focused on principles of self-sufficiency and liberty at Ready Nutrition. You can follow Joshua’s work at our Facebook page or on his personal Twitter.

Posted by TheSurvivalGuy on December 27, 2015
Posted in: Nature, Science. Leave a comment On December 24, 1968, during a live Christmas Eve broadcast from orbit around the Moon, Apollo 8 astronauts shared a spectacular image of Earth rising on the lunar horizon. The image, known as Earthrise, offered us one of the first views of our planet as it appears from deep space. The photograph has become one of the most recognizable views of our home and is often credited with inspiring the nascent environmental movement to become a political force.

Forty-seven years later, a spacecraft orbiting the Moon has captured a new view (above) that is reminiscent of the 1968 image. The image is composite made from a series of images taken by the Lunar Reconnaissance Orbiter Camera (LROC) on October 12, 2015. When it was acquiring the images, the Lunar Reconnaissance Orbiter was about 83 miles (134 kilometers) above Compton…

(NaturalNews) As advanced as modern science professes to be, it has taken a new study to reiterate what practically every child learns in kindergarten — that plant life uptakes carbon dioxide as food, releasing oxygen for animals and humans to breathe. And this process, known simply as photosynthesis, helps balance atmospheric ratios of carbon, oxygen, nitrogen and other gases in order to maintain a livable planet.

In terms of climate change, this means that trees and other plant life thrive from the carbon released into the atmosphere, and that man-made “global warming” may not be as big of a threat as is often claimed. Rather than portend to undo life on this planet, atmospheric carbon is actually helping to restore areas of dense flora such as tropical rainforests, which absorb some 1.5 billion metric tons of carbon dioxide annually, according to the Daily Mail.

Dr. David Schimel from NASA’s Jet Propulsion Laboratory found in a recent study that, contrary to popular ignorance, carbon dioxide isn’t necessarily destroying the planet as we’ve all been told. Any carbon surpluses resulting from natural warming or cooling cycles are actually helping improve biodiversity in many of the world’s most remote ecosystems, including in the great rainforests of South America.