Posted by TheSurvivalGuy on October 31, 2012
Posted in: Whatever Your Opinion. Leave a comment

Posted by TheSurvivalGuy on October 31, 2012
Posted in: Disaster Scenerios, How To Prepare. Tagged: Zombie apocalypse. Leave a comment

On Tuesday, the blocks of tightly packed bungalows and two-story houses that had characterized Breezy Point, Queens, were gone, replaced by smoke and ashes. 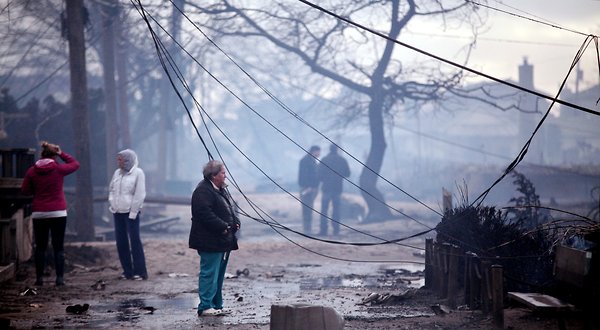 On Tuesday, the blocks of tightly packed bungalows and two-story houses that had characterized Breezy Point, Queens, were gone, replaced by smoke and ashes. More Photos »

By SAM DOLNICK and COREY KILGANNON

Cars sat amid the burned rubble after the Breezy Point fire. At least 111 homes were destroyed and 20 more damaged, officials said, though no serious injuries were reported. More Photos »

By the morning, the fire in Breezy Point, Queens, stood as one of the worst in New York City’s history: whole acres of residential housing scorched as if leveled by a forest fire. At least 111 homes were destroyed and 20 more damaged, officials said, though no serious injuries were reported.

18 Startling Quotes About The Incredible Destruction Caused By Hurricane Sandy

By Michael Snyder The American Dream

It is hard to put into words the absolute devastation that we are seeing along many areas of the east coast right now.  Boats have been washed ashore, homes have been razed, some coastal roads have been essentially destroyed, and large numbers of people are still trapped in their homes by flood waters.  It is being reported that more than 50 people are dead and more than 8 million people along the east coast have lost power.  Those without power might not get it back for a week or more.  In New York City, an all-time record storm surge of almost 14 feet caused incredible destruction.  It is going to take months for New York City to recover, and along the Jersey coast things are even worse.  Hurricane Sandy really did turn out to be “the worst case scenario” for much of the eastern seaboard.  At this point more than 15,000 flights have been cancelled, and nobody knows when subway service in New York City is going to be restored.  More than 4 million people a day use that subway system, and right now many of the most important tunnels are absolutely flooded with water. Sadly, this crisis is far from over.  The storm formerly known as Hurricane Sandy has moved inland over Pennsylvania where it continues to do a tremendous amount of damage.  The full extent of the destruction caused by this storm will probably not be known for weeks.

We have truly seen some unprecedented things during this storm.  For example, a 168 foot long tanker was driven ashore on Staten Island.  Right now the tanker is sitting on Front Street.

In the beachfront Queens neighborhood of Breezy Point, a massive fire broke out and burned just about everything that was not already flooded.  Th

e blaze destroyed close to 100 homes, and by the end of the fire more than 190 firefighters were battling it.

Some areas in the West Virginia mountains have already had up to 3 feet of snow, and yet it just continues to fall.  When all of that snow starts to melt in a few days, tremendous flooding is anticipated.

The northeast has never seen a storm quite like this, and the ripple effects are going to be felt for years to come.

“The devastation on the Jersey Shore is some of the worst we’ve ever seen. The cost of the storm is incalculable at this point.”

“The New York City subway system is 108 years old, but it has never faced a disaster as devastating as what we experienced last night. Hurricane Sandy wreaked havoc on our entire transportation system, in every borough and county of the region. It has brought down trees, ripped out power and inundated tunnels, rail yards and bus depots. As of last night, seven subway tunnels under the East River flooded. Metro-North Railroad lost power from 59th Street to Croton-Harmon on the Hudson Line and to New Haven on the New Haven Line. The Long Island Rail Road evacuated its West Side Yards and suffered flooding in one East River tunnel. The Hugh L. Carey Tunnel is flooded from end to end and the Queens Midtown Tunnel also took on water and was closed. Six bus garages were disabled by high water. We are assessing the extent of the damage and beginning the process of recovery. Our employees have shown remarkable dedication over the past few days, and I thank them on behalf of every New Yorker. In 108 years, our employees have never faced a challenge like the one that confronts us now. All of us at the MTA are committed to restoring the system as quickly as we can to help bring New York back to normal.”

“I looked out and the next thing you know, the water just came up through the grates. It came up so quickly you couldn’t do anything about it. If you wanted to move your car to higher ground you didn’t have enough time”

“I mean, there’s cars that are just completely underwater in some of the places I would never believe that there would be water.”

“I watched a tree crush a guy’s house like a wet sponge.”

“I, along with many other Breezy Point residents, lost our homes last night and I am grateful that my family and I are safe after this destructive storm. I hope you will join me in lending a hand to those who were less fortunate and keep everyone impacted by this storm in your thoughts and prayers.”

“The ocean is in the road, there are trees down everywhere. I’ve never seen it this bad.”

“I am looking outside of my sixth-floor apartment, and I see that a new lake has formed in the parking lot adjacent (to) my building”

“There are boats in the street five blocks from the ocean”

“This is the largest storm-related outage in history”

“This will be one for the record books”

“You want to talk about a situation that gets old very quickly. You are sitting in a house with no power and you can’t open the refrigerator”

“It was an extremely devastating and destructive storm, hopefully one that people will only see once in their lifetime”

So what will this storm ultimately cost the U.S. economy?  Well, Fox News is reporting that the total cost could reach 45 billion dollars.  Others estimate that the economic toll may be even higher than that.

But one thing is for certain – at a time when layoffs are already surging, this is definitely not going to help.  The U.S. economy is showing lots of signs of slowing down again, and this storm may have just nudged us even farther in that direction.

Hopefully we will have some time to recover before the next major crisis strikes, but with the election coming up early next week that does not seem too likely.

Delivered by The Daily Sheeple

thankfully, sandy was much kinder to east midtown than it was to the chelsea area. this apartment building in chelsea lost it’s entire facade.  can you imagine, you’re cuddled up under the covers with a good book and maybe a really good looking man, when all of the sudden the entire outside world can see you as you fly out of bed and scramble around  in a mad rush to find your robe?   oy.

here on east 52nd street, there was not much to report and we are all extremely grateful. here is an update on the view from my window looking up first avenue:

an enormous tree branch fell in front of my friend tracey’s building, but more interesting was the way her building staff saved their awning:

10 tips for hunting the rut

Posted by TheSurvivalGuy on October 31, 2012
Posted in: Hunting. Tagged: Hunting. Leave a comment

The rut is almost upon us. Which means the world has pretty much seen the last of me for a bit. I’ll be in the woods. And if you have any interest in tagging a mature buck, you will be too.

I’ve read and heard plenty about how big bucks let down their guard and act “stupid” during the breeding season. Well, that’s not exactly true. What they do, however, is move in daylight. And that makes life just a bit easier. But if you think you can just jump into any tree and kill a big buck, you’d better think again. That only happens in Iowa. Just kidding. Sort of. But if you hunt an area that receives fairly heavy hunting pressure, you still need to do just about everything right to put a truly mature deer on the ground.

Posted by TheSurvivalGuy on October 31, 2012
Posted in: Emergency Survival Tips, How To Prepare, Prepping. Leave a comment

Got a chance to test my survival skills over the weekend. There’s something to be said about preparers… One word…CALM!… While food was disappearing from the store shelves. We were home cooking and playing games, I also got the opportunity to do some canning… I canned my Mothers Tomato sauce recipe

and I made pork n crout for dinner then canned the rest… We bought in wood to stay warm in case of a power outage. Ron was great Protector lol, even slept in his clothes just in case SHTF and he had to spring into action and rescue our little family… lol,